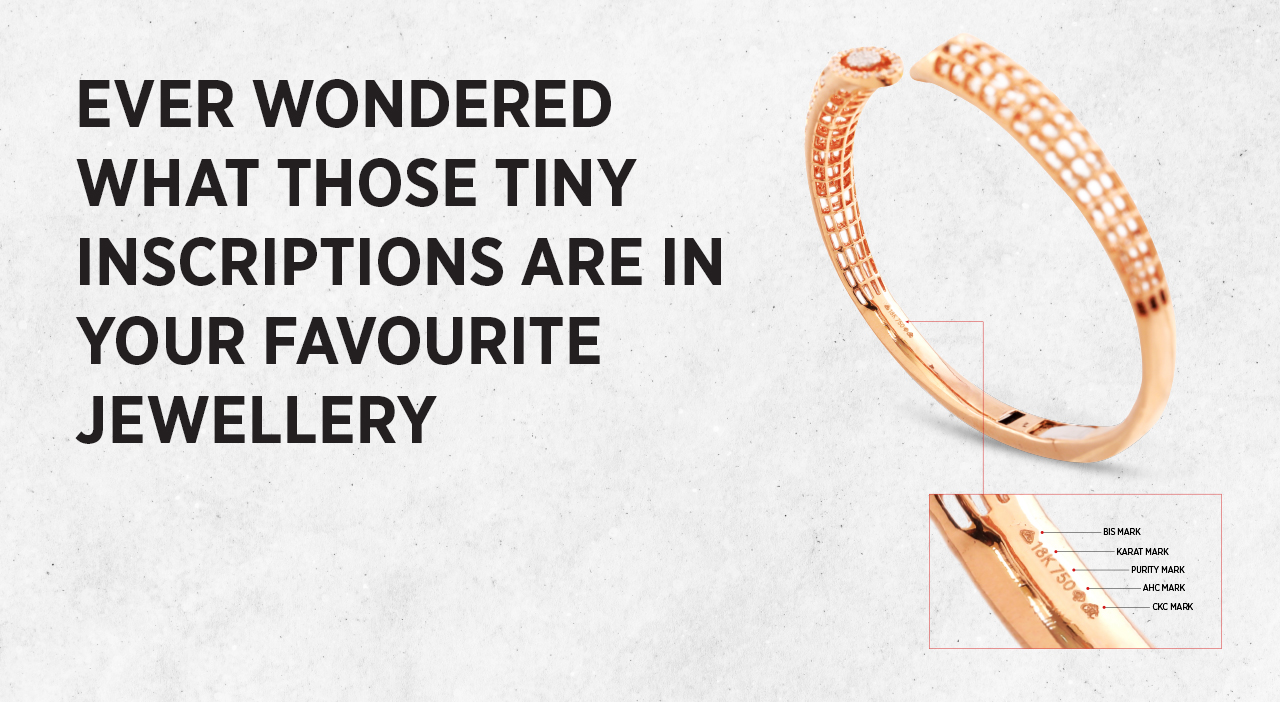 EVER WONDERED WHAT THOSE TINY INSCRIPTIONS ARE IN YOUR FAVOURITE JEWELLERY

Have you ever wonderedon the tiny inscriptions that are imprinted on the reverse of gold, silver, platinum articles or jewellery? Chances that you are wearing the jewel of the stated purity. These marks are there for several reasons –

a. The maker is proud of his work, hence signed the piece with a seal or symbol;

b. To track merchandise as they flow through the chain of work in a workshop;

c. Because a legal process has been adopted, as in few countries making it mandatory before sale. The last of these are referred to as ‘Hallmarking’ .

The Necessity and Origin of Gold Hallmark

Hallmarking is necessary today because when jewellery and silverware are manufactured, precious metals are not used in their pure form, as they are too soft. Gold, Silver and Platinum are often alloyed with copper or other metals to form an alloy that is more suitable to the requirements of the jewel or the consumer or the standards followed by the jeweller. Such an alloy needs to be strong, workable, yet attractive.

Therefore, items manufactured and sold are of different fineness of the metal purities and that needs appropriate disclosure to the buyer during a sale. To validate its purity stated and protect customers against inferior metal standards, and to guarantee that the purchase is genuine of a specific purity the hallmarking of the article was mandated.

The earliest form of hallmarking originated in Europe, dating back to King Louis IX of France and Edward I of England in the 12th Century where state-appointed assayers examined every precious metal good and subsequently hallmarked for every individual goldsmith with prescribed marks, and date of production before being offered for public sale.

The term “hallmark” refers to the Goldsmith Company Assay Office where hallmarking began in 1327, 700 years ago, with the statute being passed by King Edward III of England to the “Worshipful Company of Goldsmiths”, headquartered in London. The English term “hallmark” originates with this hall where the marks were affixed after testing, along with its official marks.

Thus, hallmarks are official markings made by competent authorities, the jeweller himself or as determined by the government, or by both and used on articles that are accurately determined with the official recording of the proportionate content of precious metal in the articles to protect the public against adulteration and to compel manufacturers to maintain legal standards of fineness.

Besides certain official marks were also used to celebrate major events like the ones found here.

Hallmarking of jewellery in the United Kingdom

All precious metals such as gold, silver, platinum and palladium sold in the United Kingdom have a legally recognised hallmark. With certain exceptions for a precious metal item weighing less than a certain amount. The minimum weight thresholds are:

The items are said to be completely hallmarked if it consists of following 3 compulsory marks.

A) The registered mark of the company or manufacturer. This mark has at least 2 letters.

B) The precious metal content is recorded in parts per thousand.

These standard marks determined the purity of the metals

Palladium (950 fineness) is indicated by the helmeted head of Pallas Athena.

Hallmarking of Jewellery in The United States :

The United States lacks proper assaying system customers are sometimes offered gold which suffers underkarating, wherein the offered gold content may turn out lower than stated. The best guarantee is an organization such as Jewelers of America who put up the letter “J” above the entrance to guarantee the quality of goods and take up obligations to observe the Code of

Ethics. However, the trademark of the manufacturer remains solely responsible before the law. Any violations of customer rights can win huge claims.

In the USA a voluntary jewellers body denotes a membership to Plumb Gold Club which has stricter guidelines and tests.

Singapore Test Service’s SAO is an independently accredited assaying centre for testing and hallmarking precious metals such as gold and silver. The assaying process is conducted using equipment such as XRF- fluorescent spectrometer and fire assaying methods that follow the Singapore Standard SS581:2012 to be considered for hallmarking.

The hallmark consists of:

A) The SAO lion head marking.

B) The Fineness mark representing the purity of the metal.

C) The Jeweller’s mark a simple logo or words to represent the company or manufacturer.

Hallmarking of jewellery in Japan

Japan Government has never practiced nor discussed systems for testing, assaying and hallmarking of gold j

Japan Government has never practised nor discussed systems for testing, assaying and hallmarking of gold jewellery items. Japan tends to accept metals such as gold, silver and platinum of the International Standards Organisations.

The following acceptable standards are:

Conclusion: The objective of mandatory hallmarking is to bring in more customer trust and protect them from falling prey to wrongful declaration regarding the purity of gold or other precious metals. As observed above every milligram of jewel must be hallmarked irrespective of weightage.

Leveraging Gold As An Asset