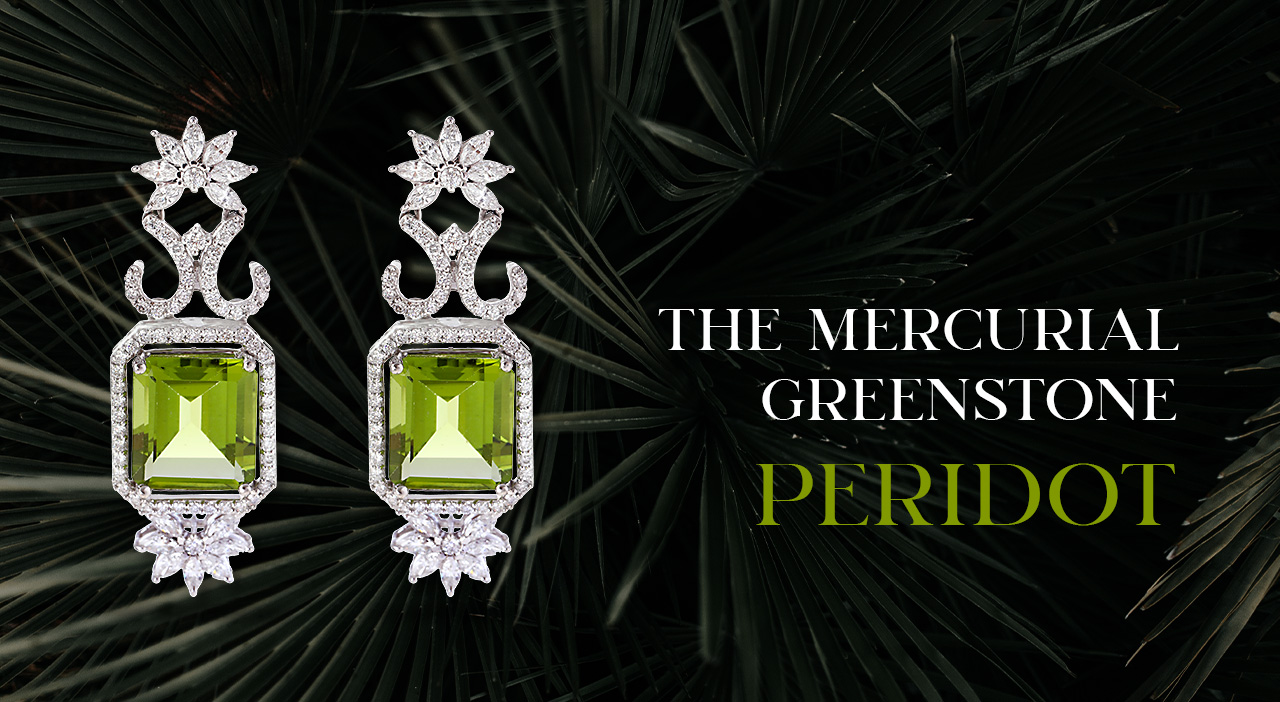 As we begin the month of August isn’t it time to know about the gem for August. Let me share about this mercurial greenstone that comes in enchanting shades of green and is considered one of nature’s most beautiful treasures.

Peridot is one of the ancient gems known to mankind. Popular in early Greek and Roman jewellery. It is believed that the mining of peridot was as early as 1500 BC. Peridot was a popular gemstone in ancient Egypt; besides it is also Egypt’s national gem. The ancient Egyptians mined peridot on the Red Sea Island of Zabargad, from where many large fine peridots have been exhibited as collectors’ gems across the world’s museums.

This is the only gem that forms with diamonds in the earth mantle and is brought to the earth’s surface through volcanic eruptions. During certain exceptionally occurrences, peridot has been delivered to earth in meteorites! These peridots are called pallasites after their discovery in 1772 by a German Scientist called Peter Simon Pallas.

Peridot is a gem that is found in only one colour in various shades of green. The gem with its distinctive hue is a narrow range of brown-green colour to yellowish-green or golden-green to olive-green to pure green. A lively and warm gem that shines even after the sunset. The gem has often been referred to as the “evening emerald” by the Romans.

Peridots are common in larger sizes of 10 carats and above these large well cut and strongly coloured gems such as the bright, kiwi green make a stunning statement piece they are breath-taking when mounted into exclusive jewellery. While many attractive smaller gems are usually studded in jewels making them affordable. Formed from the mineral olivine, its composition with elements such as iron causes its attractive yellowish green colours. This gem was often confused with the precious gem Emerald due to its green colour.

Peridot accessories rock when more sunlight falls on them. A fitting gem for summer, even otherwise its striking green colour makes heads turn and makes every outfit energetic and lively.

The gem can be faceted in various shapes and cutting limitless styles.

A relatively soft gem compared to other precious gems they need to be taken care of against knocks and bangs, to avoid them from chipping or breaking, besides they need to be protected from hard gems and metals even when placed in your jewellery box.

The was called the “gem of the sun” by the Egyptians. Cleopatra was inclined towards emeralds that she had large famous collections. There are whispers among historians that those collections might have been peridots. An analysis of the collections has convinced a few historians that some, or possibly all that was considered emeralds once were Peridots.

To conclude: Peridot is an important component of the rock kimberlite, which forms the mineral matrix in which diamonds are found.

At C. Krishniah Chetty Group of Jewellers find the exciting range of peridot jewellery for the August-born across our magnificent showroom or visit https://www.ckcjewellers.com for comfort shopping.

One thought on “The Mercurial Greenstone – Peridot”