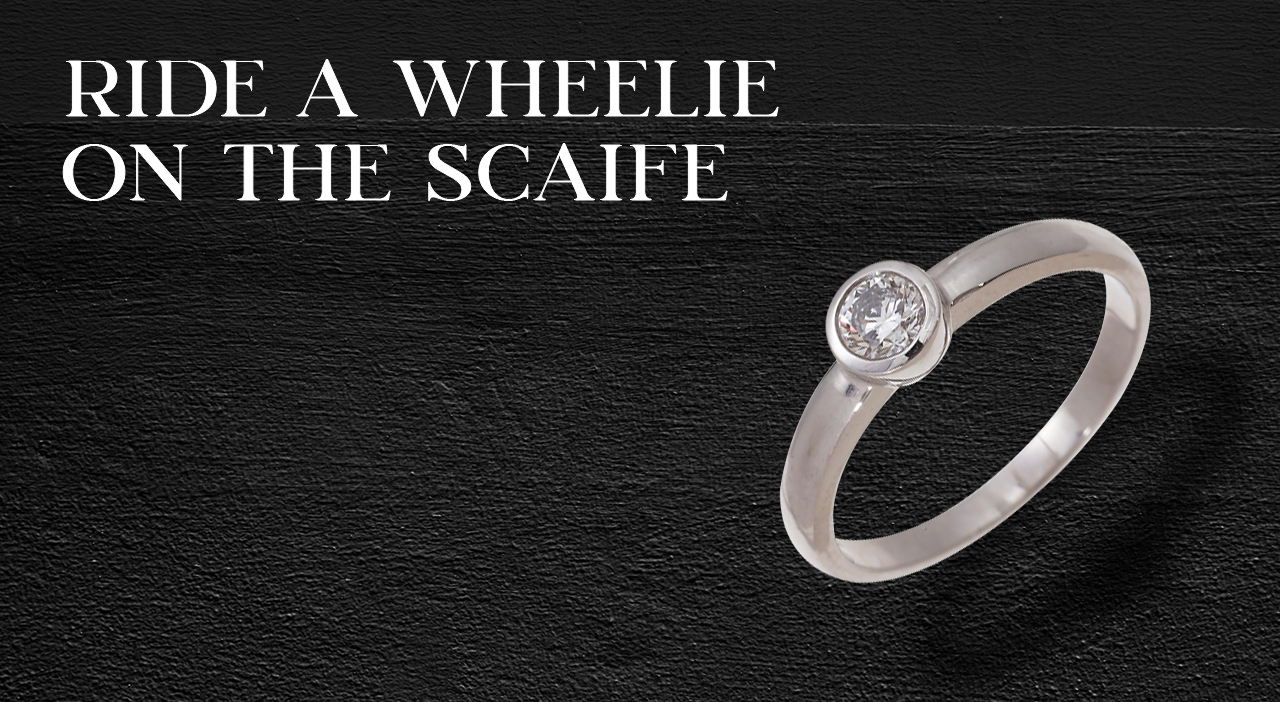 A thrilling sensation grips as we watch wheelies performed by professional motorbike riders. The riders who have a penchant to out-beat the performance of their machine exploit to the core by abruptly steering, turning, skidding, rolling, flipping, tossing, negotiate curves, doing all acrobats with daring speed but, yet incredibly and intelligently handling the machines while spectators watch breathlessly. This profession has turned to become a big business in today’s world.

Are they not scared?  Of course, it is a passion and determination that they have excelled over years of expertise to test and study the behaviour of their machine, isn’t it brilliant. Isn’t It Worth watching this brilliant manoeuvre?

Have you heard of a person called Brillianteer?

A Brillianteer is a lapidarist whose profession is to performs wheelies on his revolving desk. Clutching a piece of the diamond rough onto a tang, he turns, flips, skids, slides and grinds, on a hard disk, bringing the adamantine lustre out of the translucent crystal into a sparkling gem. It is not that easy to perform a wheelie. These are hard crystals than you think. A diamond has a few softer planes that can be grounded carefully to bring out its lustre. Only when they maintain their proportions, angles and ratios intact.

Are you now curious to know all about the wheel?

Well, let me take you to the journey of the diamond wheel.

As the story goes, India was the only source of diamonds until the 18th century. Indians were by no means new to the diamond trade. The diamond rush, which began in Africa and Brazil, titled the scales, as nations focusing on sourcing than on the producer of rough diamonds.

There are chances that you could have sighted a rough diamond while walking along the shore as they resemble like any other transparent crystal or even like a piece of glass. These roughs, when faceted, are objects that are undeniably the girl’s best friend. Diamonds are the hardest known substances and the most demanding gem materials to be faceted.

Until the 11th-century, diamonds continued using them in their natural forms, being afraid to cut or polish as they were considered sacred and believed to contain magical powers.

All of this changed in the late 15th century. A Flemish diamond cutter, Lodewyk van Bercken revolutionized the diamond cutting industry with his invention of the scaife. This polishing wheel impregnated with a mixture of diamond dust and olive oil facilitated the possibility of polishing all the facets of the diamond symmetrically at angles that reflected the light best.

The polishing of the diamond involves sliding them at high pressure and high velocity on a hard disk made of cast iron known as a Scaife, made of cast iron and impregnated with a mixture of olive oil and diamond dust used in the diamond industry to cut and polish diamonds. While the diamond is fixed firmly to an apparatus known as a dop, the dop allows cutters to create symmetrical and even facets to bring out the true sparkle and shine.

During the last two decades, the quiet industrial revolution has opened the doors to the creation of exclusive diamond cuts that otherwise would have never been possible. The lapidary trade and technology have witnessed a considerable change that encompasses computer-imaging techniques, precision measurement systems, usage of laser in cutting and AI.

The DiamondAir TM Solitaires are brought to you by C. Krishnaiah Chetty Group of Jewellers. It is one-of-a-kind crafted to display high-performance light.

•      DiamondAirTM is a top-end natural diamond.

•      Cut from the fine & eligible rough crystals from the best mines from Russia, Africa & Canada.

•      DiamondAirTM 150 facet diamond is currently available only in round shape.

•      360-degree assurance and tracking from rough mineral to finished gem.

•      Where feasible, a replica of the mother mineral accompanies the diamond from which it was born.

These diamonds are strived by collectors who have an eye for detail, rarity, value and admire fine things of life.

Exclusively available across all the magnificent showrooms of C. Krishniah Chetty Group of Jewellers. Conclusion: – Nothing is more important than accurate alignment and polished facets to achieve the sought-after Triple Excellent Diamond-cut qualification. Non-negotiable on their perfect proportions, symmetry and polish, they have undergone the stringent 35 tests and steps to be qualified as DiamondAirTM. “There are only a few things in life that are valued forever”.