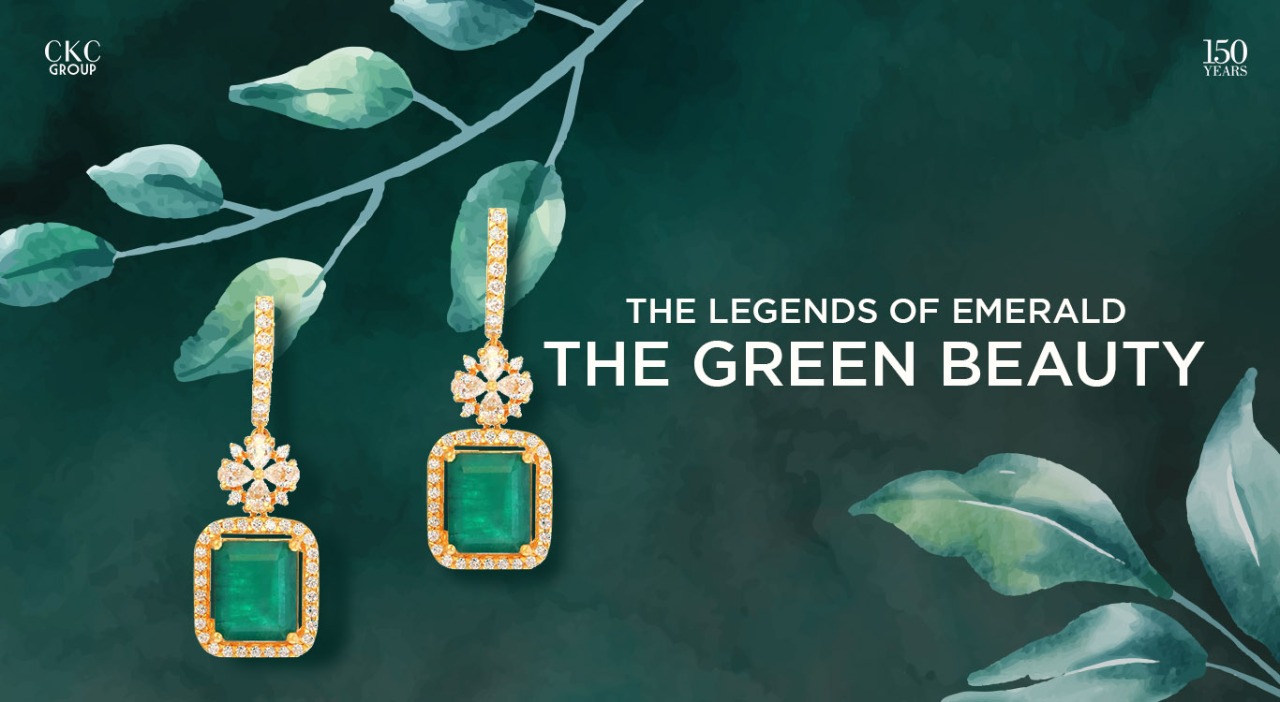 The Legends of Emerald: The Green Beauty

Gemstones; not just mere embellishments on jewellery, they encompass entire tales within themselves. From lost cities to great gifts, folklores to difficult-to-believe myths.

The green gem, Emerald too boasts a similar history and tale.

Derived from the Greek word Smaragdus, Emerald is rightfully the Jewel of Kings. Long affiliated with royalty, the gem encompasses several hues of green – from the lighter ones with hints of yellow, to darker shades with tones of blue.

Yet, while the colour of the gemstone continues to make it a matter of interest – it is what Emerald can do, or is believed to do, that distinguishes it from other gemstones.

The birthstone of those born in May, Emerald is thought to symbolize growth, compassion, fertility, and a sense of balance. These features, combined with a vivid past has make Emerald a must-have stone today (especially making it a wedding ring favourite!).

A Gift to King Solomon

Sometimes known as Jedidiah, King Solomon was the leader of Israel.

A major feature in stories pertaining to the Bible, and other various religious scriptures, Solomon was a famous king in the land, popular for his wisdom.

It is believed, that 4 stones were once gifted to King Solomon by the God. These stones, combined with the power and wisdom of Solomon, gave him control over the land and all creations living within.

One of these stones – was the Emerald.

A legend dating as far back as the Spanish Conquest, there was once a whole city of people who worshipped an Emerald.

Yes, in the city of Manta, there was once a large, oval shaped Emerald – just the size and structure of an Ostrich’s egg. Named ‘Goddess Umina’, the emerald was thought to be a divine entity by the locals, and was kept in her temple to be worshipped.

On the days of the feast festival, the high priest of the Inca used to bring the Goddess out of her temple, and allow people to look at it and worship it in all its glory.

This Emerald was considered the Mother Goddess, and it was suggested that those who wished to worship her, should do so by bringing her daughters to her. These daughters of Goddess Umina were in reality, smaller Emeralds.

As the local Inca continued their worship, life changed as the Spaniards invaded. Going through every nook and cranny, them took control of as many Emeralds as they could find – like a loot. Many were even smashed in the journey. However, the Goddess Umina was hidden carefully – and never found.

The Hindu religion also hints at the importance of Emerald. The aspect of giving and offerings ranks high as part of beliefs, therefore it is thought that whosoever offers Emeralds to Lord Krishna, they shall receive “Knowledge of the Soul and the Eternal”, be given high rewards, and held in high esteem.

The legends of Emerald also make their way to Greek Mythology.

Greek tales consider Venus as the Goddess of Love and Beauty. It is thought that she emerges from the sea, and therefore the ‘sea green’ colour of the water ties itself to the same hues found in the gem, Emerald.

It is believed that Emerald continues with the work of Venus; to promote love and truthfulness. To protect lovers from going astray or on a path leading to unfaithfulness, the green of the Emerald comes into play. Curious how an Emerald can depict faithfulness?

People believed if the lovers wore Emerald – the gemstone itself would depict when their hearts were not in the same place anymore. The gem was thought to glow bright green if the couple was still in love. Yet, if any of them yearned for another individual, or felt their love diminish, the Emerald would show it – by dulling down and becoming lifeless.

So if you want to test the truthfulness of love, perhaps its time to get a pair of gorgeous Emerald earrings like these!

Emeralds and the Future

The green gem is also thought to have another peculiar quality; to predict the future.

While the reliability of the lore still remains a question, it is thought that wearing the Emerald in a certain way or position can help foretell the future. Two such positions have been thought of as:

While the second option seems a bit weird to perform, perhaps the first can be given a try to see how good we get in foretelling the future. Probably a longshot, but if you wish to test the authenticity of the legend first-hand, a simple way could be to wear a beautiful Emerald ring such as this one, on any finger of your left hand.

While myths and legends remain myths and legends, none can be sure of their authenticity. Yet, true or not true, the legends of Emerald do point towards its importance in previous times, and current ones. Which means they must have something special indeed.