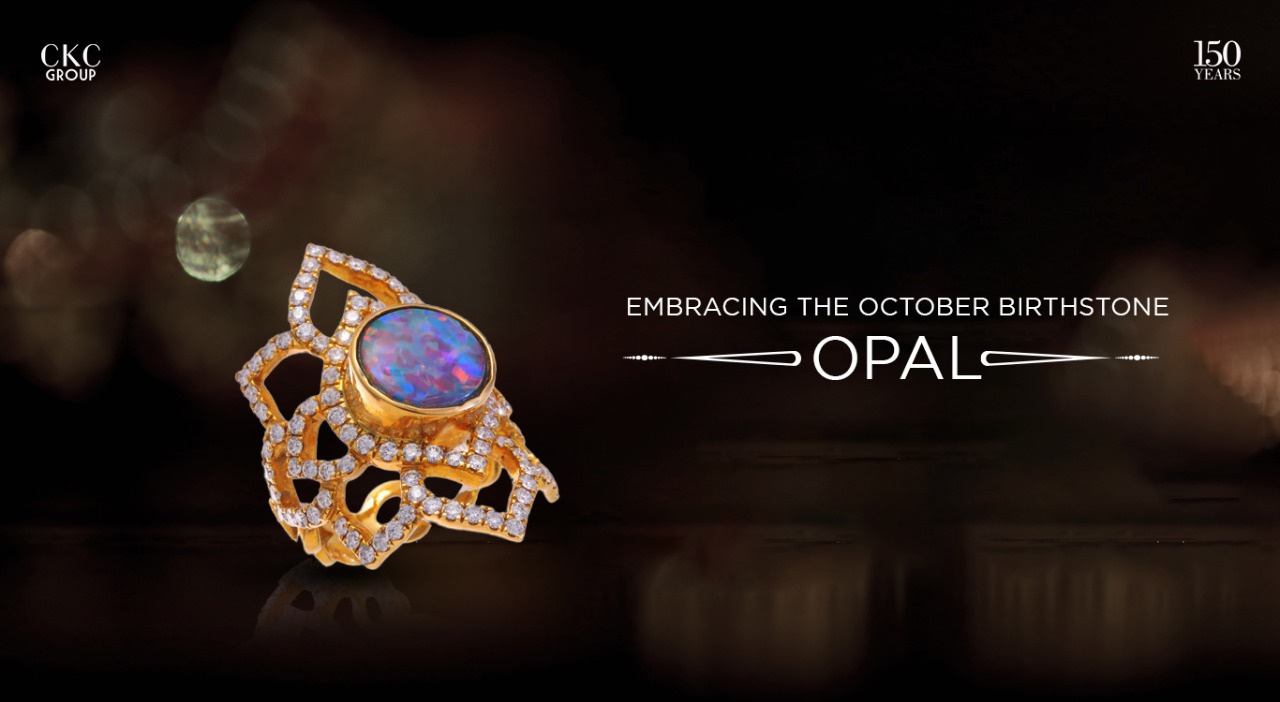 When you are born, you are assigned many elements; a name, a family, a home, and – a birthstone!

For those born in October, your birthstone is Opal, a distinct gemstone among the world of gemstones indeed!

However, owing to its rather feminine outlook and nature, the gemstone Pink Tourmaline was also added to the list of birthstones for October. Yet, Opal continues to remain one of the favorites. A feminine look in our jewellery? Yes please!

In fact, Shakespeare called Opal as the Queen of Gems, which certainly makes you too – the wearer – nothing less than a queen.

The Origins of Opal

Tracing the roots of this beautiful gemstone, we find it a part of many cultures. In Sanskrit, Opal was called “Upala”, meaning precious stone. Conversely, the Greeks referred to Opal as “Opallios”, which meant seeing a change in colour.

While the names sounded quite similar, they upheld different properties of the Opal; to be so precious and filled with so many colours. In fact, the Opal is thought to possess every colour in itself – myth or not, let’s see!

When discussing Australian Opals, it seemed they ranged from subtle reds to bright greens and even black and blues! This made people think: Are Opals really available in each colour, or is it a deception of the eyes?

A research was conducted in the 1960s and made a startling discovery. The precious Opal that we see, actually has a lot going on the inside that determines its hues. The gemstone consists of very small sphere-like particles of Silicon Dioxide. The arrangement of these spheres is what makes way for the prismatic appearance of the Opal.

In simple terms: the Opal seldom has light of its own, but instead when arranged in a certain way, it reflects the light shone on to it – thus presenting a kaleidoscope of colours!

Presenting a multitude of colours, it is no surprise that the Opal was affiliated with the 7-hued rainbow in many cultures.

The Indians thought the Opal actually represented a beautiful goddess – the Goddess of Rainbows – who had converted herself into the gemstone simply to stray far from the advances of other Gods near her.

On the other hand, the earlier natives of Australia, the Aboriginals, thought the Opal and its changing colours signified the Rainbow Serpent.

The Tears of Zeus

Diving deep into Greek mythology, it seems every gemstone has had a story to tell in the world of the Gods, and Opal certainly makes the list.

It is thought that after battling a long war against the Titans, the God of the Skies and Lightening, the Mighty Zeus shed some tears.

Yet, as these tears landed upon the ground, they turned into the precious Opals; filled with light and might, and thus depicting a prismatic appearance

The Cloak of Invisibility

A peculiar notion associated with the Opal was that of Invisibility.

Yes, you read it right.

In earlier times, it was thought that if someone wrapped the Opal in a fresh Bay Leaf and carried it with themselves, they would become invisible to the eye of the seeker. This is why, Opal often became being called Patronus Furum, or, the Patron of Thieves!

Like Harry Potter’s Cloak of Invisibility passed down from the third brother in the Deathly Hallows, perhaps the Opal is our own invisibility cloak in the world of today. Wish to try it on your own? Pick up any jewel from our vast Opal collection – perhaps a mystic Opal and Diamond ring – and let’s get testing!

Another ability that made the Opal stand distinct from the rest was its effects on the eye.

On one hand the Opal remained a symbol of hope, assurance, and fidelity for all. On the other hand, it was associated with therapeutic powers too! On the surface, it was thought to cure the diseases of the eye. When delved deep within, the Opal was considered to surpass our bodily outlook and enhance the powers of our eye and mind; giving us immense power!

Do you believe in the powers of the Opal for the eye? Are you sick of wearing your glasses due to weak eyesight? Perhaps wearing Opal could cure it for you… or could it? Nothing beats trying! Wear a ring as subtle and modern as our doublet Opal and diamond ring and see for yourselves!

Not just beneficial for the eyes, it was thought that wearing the Opal went above and beyond in enhancing beauty too! In fact, in earlier times when blonde maidens in the land suffered from hair woes like darkening or fading; they embarked upon a search for a beautiful Opal necklace they could wear. This necklace was thought to protect their hair, and keep it shining, coloured, and beautiful forever!

Perhaps you could try it for yourself too with a classic Opal necklace from our collection.

Born in October or not, there is no stopping you from experiencing the might of the Opal. With its bright, brilliant colours, purchase a loose Opal or Opal jewellery from our expansive collection, and join the community of Opal-lovers surpassing times and cultures!