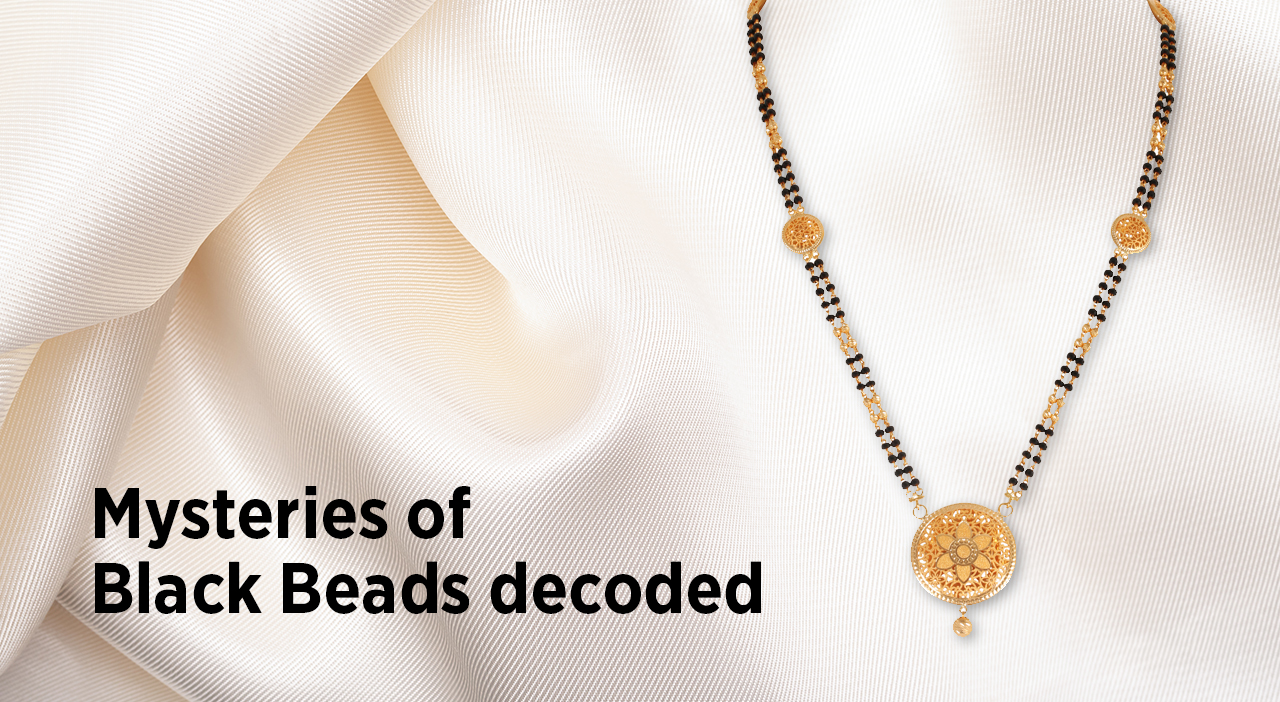 We sometimes wonder why our culture and religions revolve around the black colour that is, supposed to represent inauspiciousness.

Black has a wide range of symbolism and meaning than any other colour. The colour black is associated with power, strength, mystery, fear and evil. Neither is it an attention-seeking colour nor looking to stand out.

Wondering. How some colours have irrefutable been pre-programmed into us as a part of culture and religion? How did “Black” become a metaphor for all evil?

People have avoided wearing black for all auspicious occasions as it sends out a mixed message. Black can send opposite messages depending on who you ask as it can represent dark or invisible to one, a sign of power to another. Then how best is it to define our traditional black bead Mangal Sutra?

How is black connected to auspiciousness?

The tradition:-  Every Tradition is relied based upon defined scientific theories and has been meticulously followed since time immemorial, while some of the rituals are accepted. A few have been assigned superstitions due to incomplete knowledge. With time, the customs continue to being followed without reason.  If the colour black represents inauspiciousness. How is it that the mangal sutra with black beads is considered auspicious?

The black beads: – Can we look at the sacredness of the Black Beads that the women adorn as a chain or just beads along with Mangalyam or thali. Unaware of their significance, they continued to be used as an object to design solely for ornamental purposes today.

Relevance to the black bead: – Jagadguru Sri Adi Shankaracharya recapitulated the concept of wearing Mangala sutra in one of the famous books Soundarya Lahari.

A jewel post-marriage and a part of women that make her marital status pronounced to the world.

The Original form of black beads: – Historically, these beads are assumed to be jet, glass or onyx. Onyx was probably the most common stone used to make black beads.

Today these beads have been replaced with black spinel, black tourmalines, obsidian, black pearls, synthetic black crystals, more generously in various jewellery. However, black glass beads continue to be manufactured by adding large quantities of manganese, cobalt with or without iron making them appear black.

Did you know? There are around 36 pieces of essential jewellery’s used during the Vedic era. Each signifies the body mechanism that allows the wearer to imbibe a divine consciousness and to reduce or defend against negative energies. It’s Amazing to know their scientific reasons attached with every piece of ornament.

And do you know?

Ghana has one of the long traditions of bead culture that dates back over the last 4000 years.

In conclusion, colour is a complex subject, in short, a perception of one’s desire. Colour makes life meaningful when defined like the astrological gems that one wears for well-being.