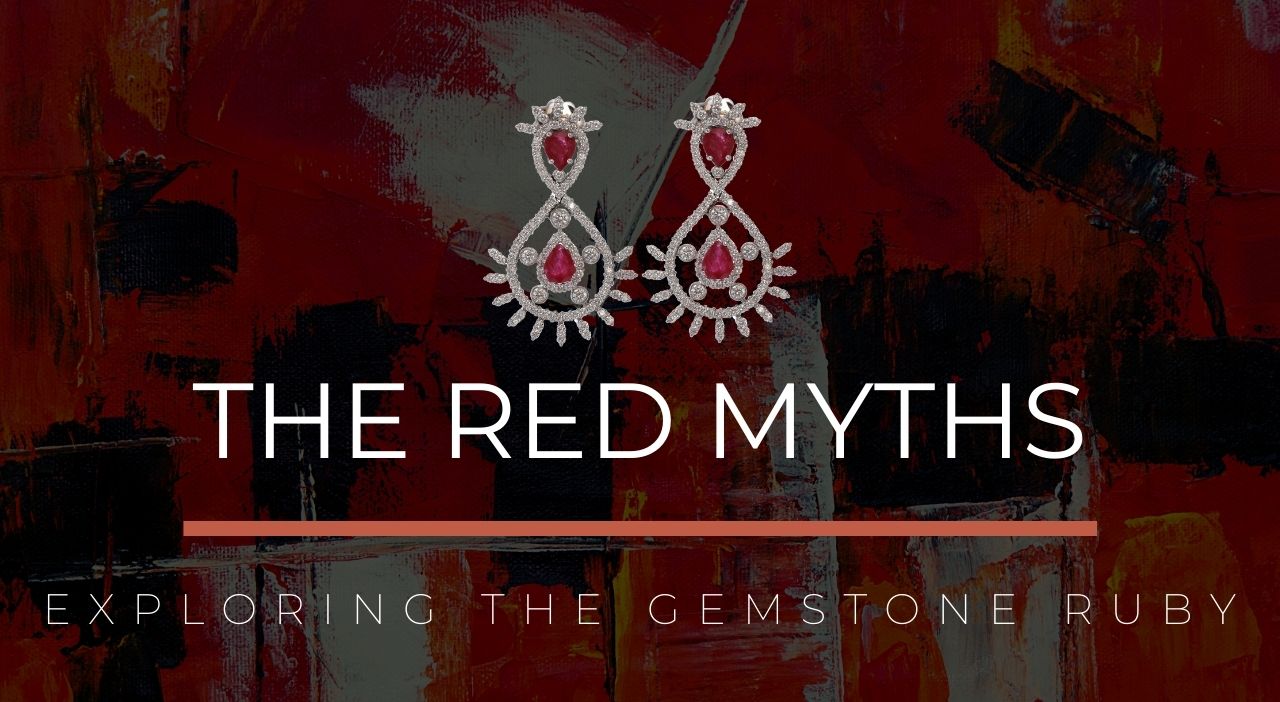 The birthstone of July, and the “King of Gemstones”, Ruby certainly is a popular gem choice among a vast collection.

As we look at a glorious red ruby, one word pops in mind – Love.

Yet, the Ruby is representative of many things along with love. It is a stone exclaiming passion, power, wisdom, and sometimes, even anger. However, due to its beautiful outlook – it has easily made its way into our jewellery.

While we may love to wear the Ruby in our favourite ring, or a statement necklace – do we really know what the Ruby says?

Today, let’s explore the background and roots of the Ruby; where it comes from, what it beholds, and what it promises…

The Ruby has been a popular gemstone in Christianity.

It is mentioned in the Bible 4 times precisely. It is thought when God created the 12 mighty gemstones, he gave special attention to one of them; the Ruby. Declared as the “King of Gemstones”, God then requested Aaron to wear the Ruby around his neck in the form of a beautiful necklace. This was to protect him.

The Hindus have also given notable importance to the Ruby.

They first called it “Ratnaraj”, which translated to the “King of precious gems”. Later, the name was transformed to “Ratnanayaka”. This meant the “Leader of all precious stones”. Albeit called different names, all translations pointed to the same high and might of the Ruby.

Offerings to the Gods

It is common in many religions to offer the best of the best things to the Gods as offerings.

In Hinduism, gemstones and jewellery are often gifted to the Gods in the form of offerings in temples. These can be offerings as part of special ceremonies, or those that are stand-alone. It is thought that whoever gifts a small ruby to Lord Krishna as an offering, shall be reborn in the next life as a King. On the other hand, he/she who gifts an extravagant and large Ruby (or Rubies) shall experience rebirth as an Emperor.

The Curious Case of Rubies and Boiling Water

The origin of the Ruby in many legends is thought to be by a fire that occurred in Heaven i.e. a mighty lightening flash. As a result, Rubies came to possess immense heat and power.

Since many Rubies are glowing red in colour, this has also contributed to the spread of the legend as enlightened stones can hint at a glowing fire from within.

Due to such a quality of Rubies, it is thought that if you toss a Ruby into a bowl of water – it shall instantly come to a boil due to the heat and power of the Ruby.

While you can test for this legend at home, to test its authenticity, we urge you not to. The possibility of boiling water can be dangerous and alas, Rubies are far too lovely to be simply thrown in a bowl of water.

Have the Ruby adorn your ears instead with these gorgeous diamond drop earrings.

A Little to the Left

While it may sound odd to hear, it is thought by many that wearing the Ruby on the left has a variety of benefits.

From blessing the wearer with all sorts of health, wealth, and wisdom, it is thought to bring them the success they desire. Sort of like their own lucky charm in life, guiding them to good fortune.

This is not all, wearing the Ruby on the left is also thought to bring everyone happiness in their relationships. Promoting friendships and offering protection from enemies and foes. If you want all this for yourselves – wear the Ruby on a finger of the left hand in the form of this beautiful gold ring from C. Krishniah Chetty Group of Jewellers.

With nothing to lose and so much to gain, this legend is certainly worth a try.

Since it was already believed that wearing Rubies on the left offered protection from enemies – it comes as no surprise that Rubies eventually marked their entrance into battlefields, in a way we could not have imagined.

Some wore the Ruby on the left as a way of showing invincibility against a difficult opponent. However, there were many who believed the protection power of the Rubies went as far as healing them. Thus, many soldiers actually inserted the Ruby inside their flesh and skin to remain protected throughout the battle.

It was said that these soldiers then became fiercer while fighting, and also gained a mighty resistance to wounds and injuries.

Is this all because of Rubies? Perhaps we shall never know.

As Rubies symbolize wisdom and good fortune, many believe that Rubies hold the power of prediction. They can sense when any disaster or calamity is near, and immediately change colour. For example, they are thought to grow dull as disaster approaches.

While we may not know of the authenticity of the legends of the King of Gemstones, we can certainly vouch for the beauty it beholds. Visit C. Krishniah Chetty Group of Jewellers, and add the glory of this gemstone to your vast jewellery collection.

Exploring the Depths of the Coral