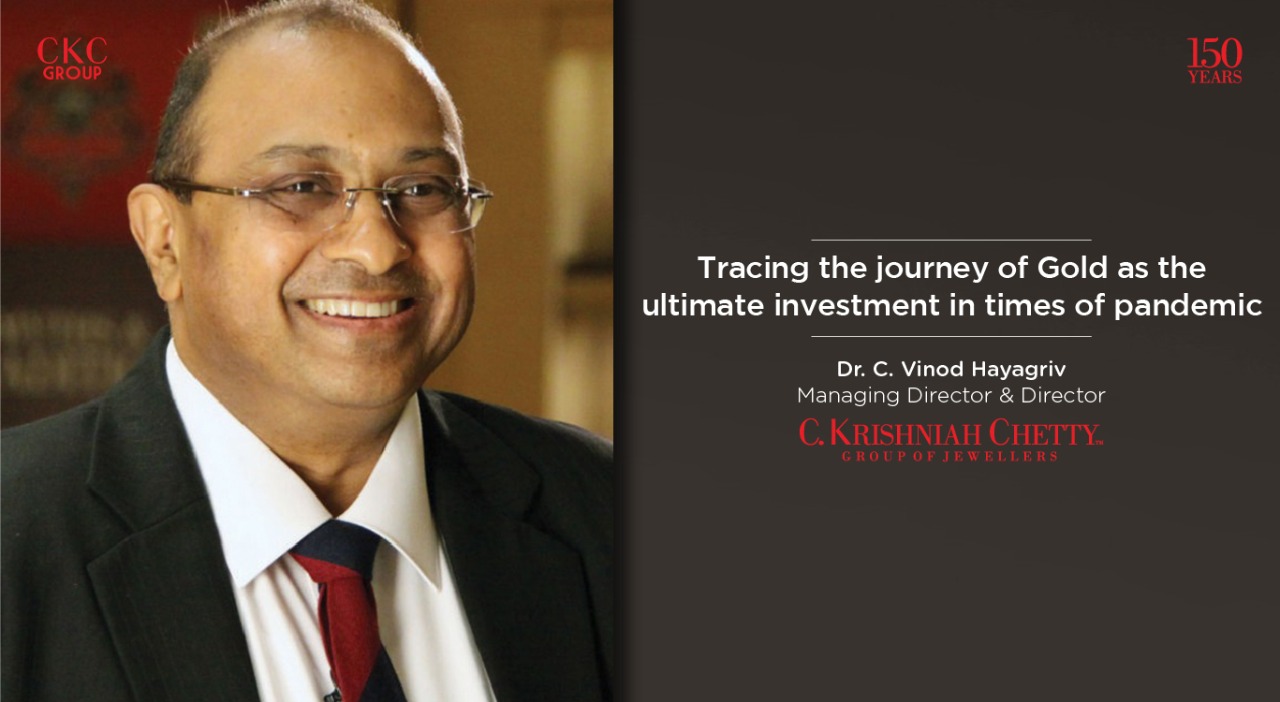 Gold has been a store of value for thousands of years since the start of human race. It was then a medium of exchange in barter deals and today it is gold banking by central banks. Thus, it has remained the favourite investment option across cultures, communities and countries and through the ages., Economic Pundits affirm that Gold will be around for a long time to come.

It is during a crisis situation like now that gold proved to be the ultimate safe haven for investors looking to protect their wealth. Whenever it has been beaten down by the commodity traders, it has mostly bounced back after a short lull, and often with a vengeance. After the Global Financial Crisis of 2008-09 that continues to have an impact on the global economy gold has proved its worth. Large quantities of investment globally, from retail and large investors have moved their investments to gold.

From a peak of $412 per ounce for gold, in 1996, in August 1999, gold fell to a low of $251.70 on worries about central banks reducing their gold reserves and mini-companies selling gold in the forward markets to protect against the falling prices.

Yet again, the current pandemic wrought about by the nCoronavirus or CoViD-19 has had a debilitating effect on the global economy, depressing all asset classes, but the yellow metal has come out shining proving beyond doubt that gold is indeed the ultimate asset. It has risen, rather skyrocketed, while almost all other asset classes have lost value due to poor demand as industrial units sputtered as the virus continues with its dance of death.

This, at a time when crude oil was beaten down by a price war and even began to be priced in the negative with the Texas crude even hitting a negative $ 40 dollars to a barrel, gold has eternally been seen as a ‘safe haven, and it has once again proved that it is indeed the king of the investment.

Whenever any government has made any attempt to stimulate growth, gold mostly leads the growth in demand for assets. Now, with governments across the world set to announce packages to kickstart economies and try to shift them into high gear, gold will be around to share its sheen. Gold will benefit from the widespread stimulus measures as it is often seen as a hedge against inflation and currency depreciation/ devaluation. Thus, investors and consumers will display their appetite for gold as the preferred asset class.

So investment in gold has seen many avatars. Gold is not only a favourite of investors but also those who love wearing gold jewellery that is handed down through generations. People have found various ways of investing and facilitating investments in gold. Many convenient ways of buying gold have been devised. Gold ETF is one such.

Now, while blocks of gold remain in the coffers of the public, jewellers need to contribute to value-added consumption to increase the GDP. Now we see jewellers are increasingly beginning to lean towards offering similar or better benefits than ETF through introduction of Accumulation or saving schemes. However, these schemes do not allow return of monies to the buyer or one who pays monies to the jeweller.

With volatile gold prices, and with restrictions on movement due to COVID19, one such as  Paper Gold™️ holds an advantage to the retail consumer This includes building a jewellery wardrobe or withdrawing from the booking of 22 Kt gold by paying fixed sums to a retail trader and at the end of a set period, the customer has the option to buy gold or diamond jewellery for the sum paid or cancel the booking and withdraw from the booking of such  Paper Gold™️.

Investing in  Paper Gold™️ meets all the criteria, more importantly it helps one to own the gold without physically having possession but convertible to jewellery or taking the money back at prevailing rates and with a buying selling price difference. It gives one peace of mind as they are saved from the risk and tension of mandatorily buying jewellery as canceling the booking is an option.

Recent news reports have guesstimated that gold would hit INR 50,000 from the current levels by the year-end, while some commodity experts predict gold touching INR 80,000 by the end of 2021. It is also being reported that gold will crash. Hence, while nothing is certain, one established view is that gold has withstood all calamities with Sterling results in the long run.  Paper Gold™️ seems to be a hedge against the rising or falling price of gold.

While universally gold is seen as a stable investment that has been beating all odds, in India, gold is considered a means by which one can secure one’s future (more than just investment, but a thing of beauty, or need of show of wealth, or plain custom). It’s also demonstrated as a stable store of value. In India, particularly, when the need arises, the gold may be sold or pawned for money as is expected. When not an investment option, wear gold as jewellery.

Through the most testing times such as depressions, recessions, wars, and most recently pandemics, gold has stood like the proverbial ‘Rock of Gibraltar’.