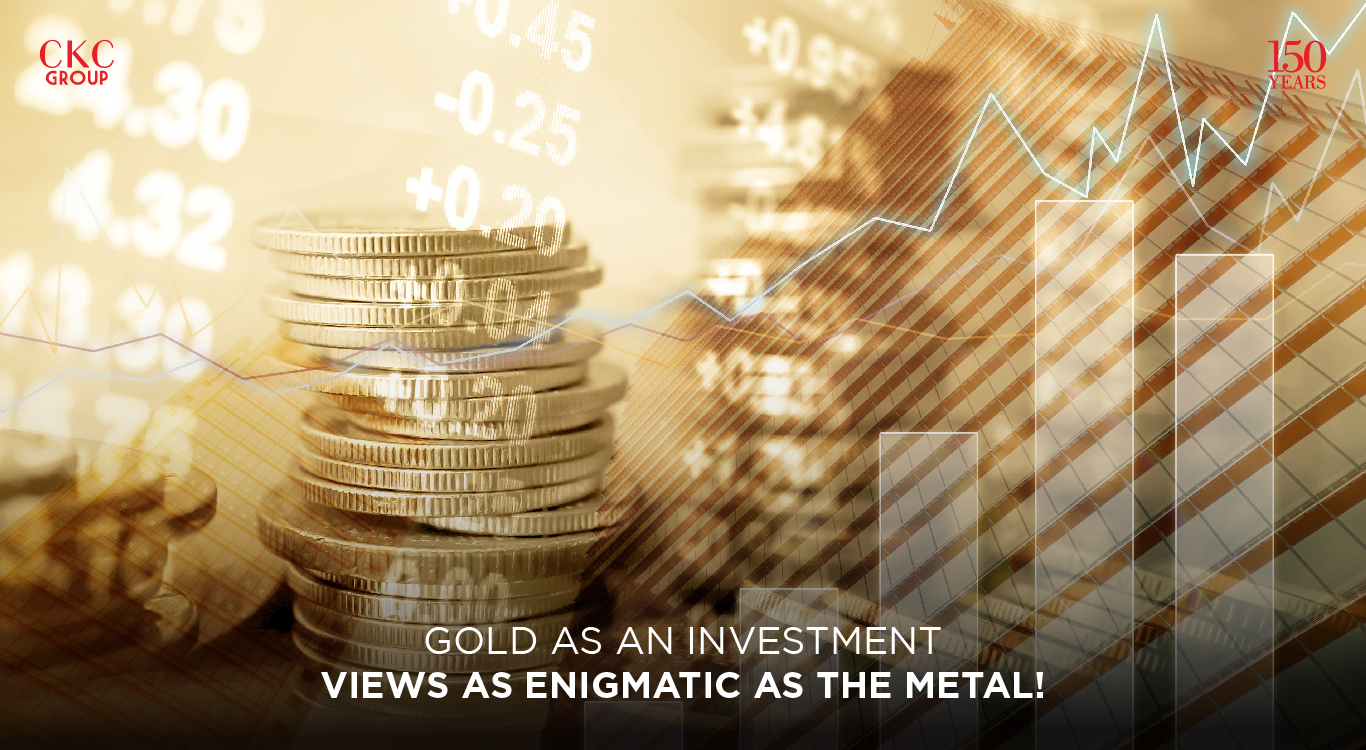 Gold as an investment – views as enigmatic as the metal!

Gold gets dug out of the ground in Africa, or someplace. Then we melt it down, dig another hole, bury it again and pay people to stand around guarding it …Anyone watching from Mars would be scratching their head. – Warren Buffett.

Gold as an investment option evokes contrasting reactions from investors and fund managers across the world. While some swear by it some others completely avoid it. Taking tactical calls on gold has never been easy due to its track record of sudden reversals.

What drives the demand for gold?

Gold is an asset investors choose when the perceived risk in other assets is high or in other words when value is to be preserved. Gold finds favour when the value of currency, purchasing power or interest rates begin falling drastically leaving no options for a reasonable income stream for bond holders and depositors.

War like or war situations drive nations to borrow heavily as their fiscal deficit shoots up causing inflation. Nations default on their bond obligations and free movement of capital is impeded. Gold is an ideal store of value in such cases.

When traditional income bearing investments are perceived to hold risk, attention shifts to gold. The drivers are mostly international but local when the crisis is geographically contained affecting only that population. Like a war between only two nations or economic mismanagement – for example the situation in Venezuela.

Why isn’t gold an option for all investors?

Assets are considered worthy of investment if there is a stream of income associated them. Bonds and deposits have interest income, property has rental income, and businesses (equity) have profits and dividends. Gold however, does not have any of these.

Gold is known to be volatile, suddenly reversing its trend. Markets are extremely sensitive to changes in the environment and anticipate them very early. When they sense a reduction in risk, they quickly dump ‘safe’ assets like gold and move to more profitable risk bearing assets.

Is gold recommended as an investment now? Why?

Though for most part gold was not recommended as part of an investment portfolio apart from a bit in 2008, it was always given importance for its earnings capability of equities as a class. (Of course, given the cultural compulsions families do save gold to gift their children during marriage. To that extent, gold has been part of the savings habit and no more.)

The last recommendation was in late 2019 with a 5% allocation suggested as a tactical measure, which again was left to the choice of the investor. For the record, there has been a strong rally by gold since the end of 2018 and a stronger one since last quarter of 2019.

Analysts have taken a serious relook at gold as an investment option is the context of Covid-2019 and its impact on global economy. As discussed, one of the key drivers of gold prices has always been interest rates. After the massive Quantitative Easing in the US by the FED post the Global Financial Crisis of 2008, interest rates were kept low to help growth. Given the uncertainty in economic fundamentals, gold continued its rally that had begun with the World Trade Center Crash in 2001.

Gold’s volatility since 2012 has entirely been due to the ending of QE and the subsequent inability of the FED to pull back interest rates and keep them there. After the FED all but gave up last year, the recent rally gained strength. The panic caused by the pandemic has only gone to strengthen the case of gold even more.

Interest rates in the US have been going down ever since Alan Greenspan took over in the 90’s, from 9% yield on the 10yr Treasury to 0.65% now. As US stares at a recession there is little chance for interest rates to increase and they are in fact expected to come down further.
The inverse correlation between US interest rates and gold prices is evident and reflects happenings of the last 50 years.As interest rates tend closer to zero and economists speaking in favor of negative rates in the US, there is a greater potential for gold to continue its rise.

Gold prices versus US 10 yr Treasury yield
The US dollar is considered as one of the safest currencies worldwide. Central banks keep most of their forex reserves in USD denominated instruments like Treasuries and investors the world over prefer to move to USD in times of panic. When interest rates are positive in the US, it adds strength to the USD. Panic situations enhance this strength. Like the present situation.

What works against the USD in the medium term are:

–          Reversal from panic mode when investors will start to move away from the liquidity of USD to other investments, including gold.

So summing it all up:

1. Whenever the USD has been strong, gold prices have been weak

3. USD strengthens after QE comes to an end resulting in gold weakening and retracing most
of its gains since GFC

4. USD strengthens with prospects of rates firming up, but FED throws in the towel

5. Strangely, after which both USD and gold have strengthened in parallel

This parallel rally is the strange part and given the trend of rates in the US this could reverse i.e., the strength of USD. Combined with the assumption that investors will shift from USD to gold as panic reduces before moving on to risk bearing assets and the possibility that China (and other central banks) could increase their gold holdings by reducing USD, there is a good chance of gold rallying further in the next two to three years. China has begun to increase its gold reserves after holding it constant for many years, and so has Russia.

The reasons for supporting an allocation of up to 10% of portfolio to gold as a hedge perhaps because of:

This move can be done over a period of the next few weeks in tranches, with buying perhaps on down days ideally through gold index funds that faithfully track the price of gold.

Disclaimer: This document is meant to be a research input and investors must discuss with their advisors before taking a decision based on these inputs as each individuals’ situation and risk appetite are different.

The Right Hair for the Right Jewels

Dressing Up For Eid – Fashion & Bling!